Hurray! Larry T. is back with a guest blog! I was getting lonely here in Richieblogland, with only my own Richie thoughts. I love when we have a guest blogger and a story about my cartoon boyfriend, Cadbury, what could be better? And scroll to the end for a link to another Richie story on another great blog! Without further ado…

I know Cadbury is a personal favourite of the blog author, so I thought I’d scan a few stories from my Little Dot comic books. He really is an emotional sort!! Even though he is extremely dignified and has so much self-discipline that he can hide it in the presence of the Rich family.

But before we start the story, let’s take a look at Cadbury losing it. The first one-pager gives him a more human side… listening to Richie’s joke but containing his laughter until then next day.

I love the great artwork here- the close-up of Cadbury’s face and the droll little smile… “haw”.

Next exhibit shows him a little more cross… at Richie, nonetheless!!! I guess he really does have quite the temper. Fortunately he was out of view of the Riches, this outburst may have had him fired!

The tongue sticking out is a nice detail, LOL, I bet he dropped some pretty harsh f-bombs that day!!! I’ve never seen him like this! I love it! He is human after all!

And now the best of the test of the best. Mean cousin Reggie visits and makes a bet that he can get Cadbury to lose his cool. 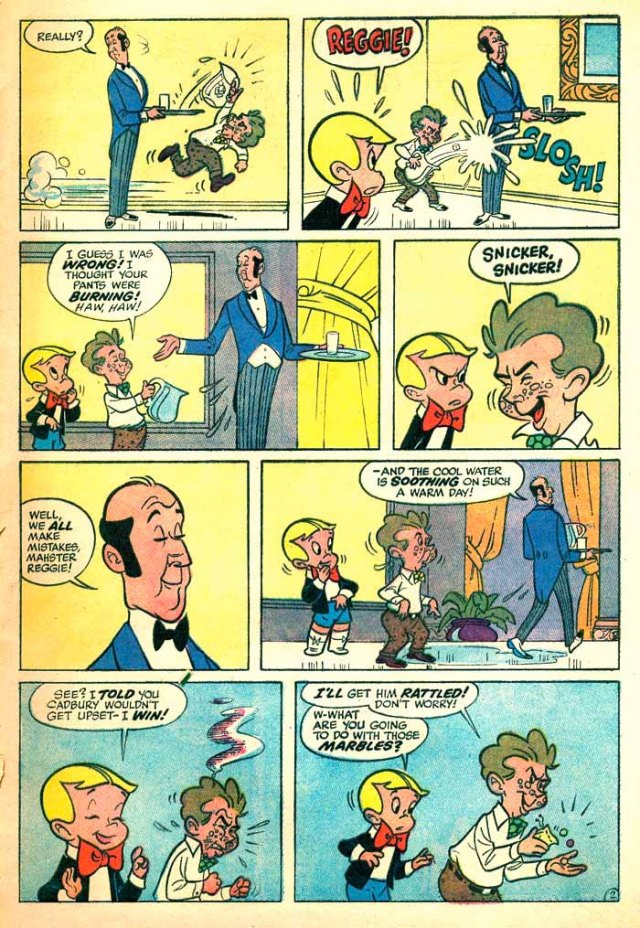 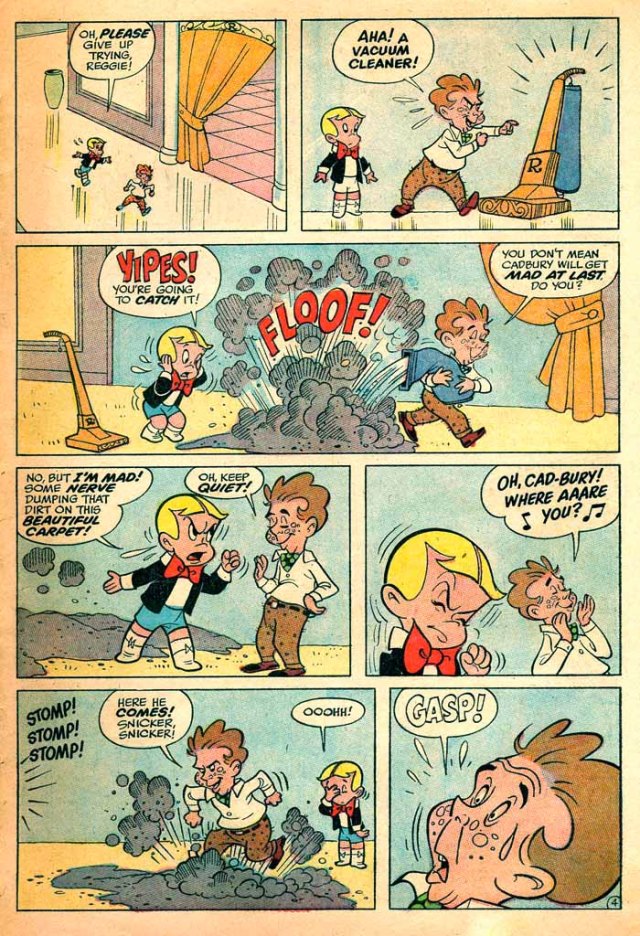 I always wondered why Richie is so confident that Cadbury will not display anger, has he deliberately tried to provoke the guy in the past himself? One of the best parts of the story is the actual dare- I don’t believe Reggie lives that close to Richie so pushing a peanut home with his nose would take a lot longer than a day LOL!!!

Cadbury smiles all the way, no matter what tricks Reggie pulls on him. Hopefully he wasn’t on his way to one of Mrs. Rich’s afternoon tea parties with that jug of water, they would have wondered why his pants were wet. Come to think of it, I also wondered how often the maids empty the vacuum cleaner bags- the one Reggie dumps must have been in use for a few months!!!

The last panel is the payoff… it’s worth it to see Cadbury actually really pissed off!!!

This is why I love Richie Rich so much, you never know how the story is going to end. Sometimes it’s fairly punny with some chuckling, sometimes there are beatniks living in the house, but a Cadbury mask, who was expecting that? I love it! Perhaps it inspired this story:

And that’s not all, head on over to Big Blog of Kid’s Comics as Mykal has posted another story to read! (Plus a Lotta comic for Larry) 🙂

It’s not surprising that with all the people employed by the Rich estate, one can rarely have a moment of solitude. Dear Richie really just can’t get a moment of peace on his own expansive land. He should just stay inside and explore the mansion, no one is ever around inside! 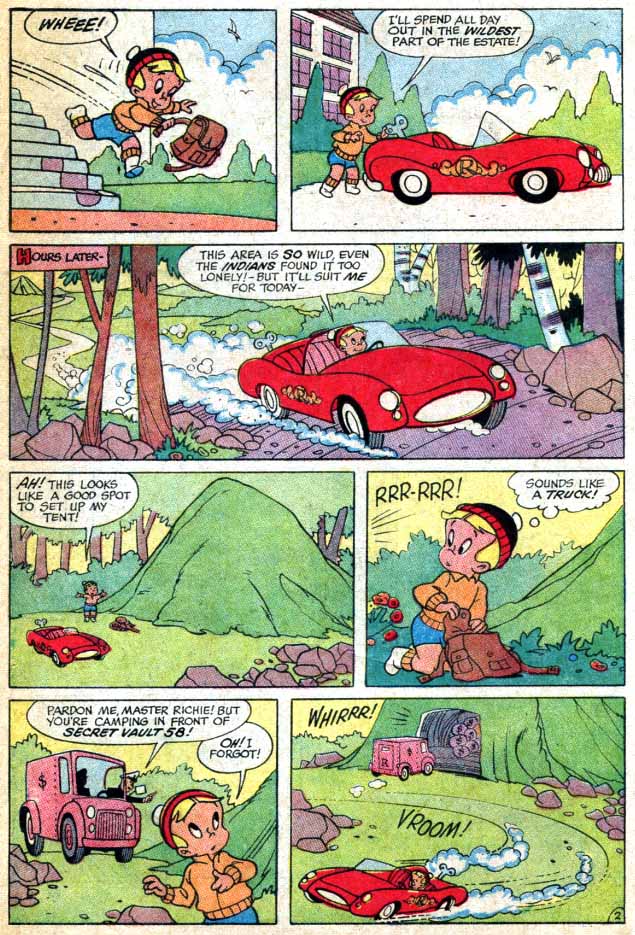 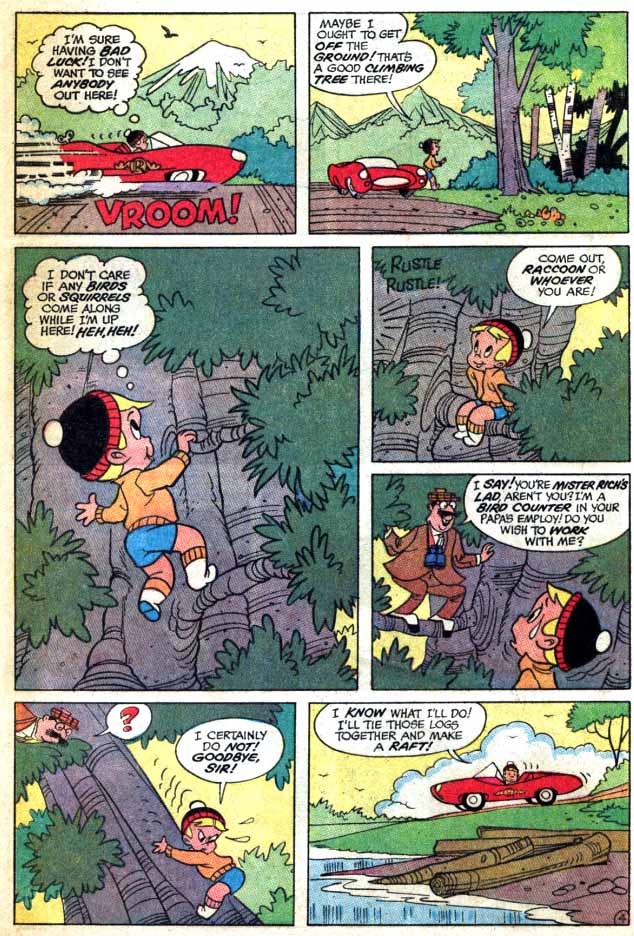 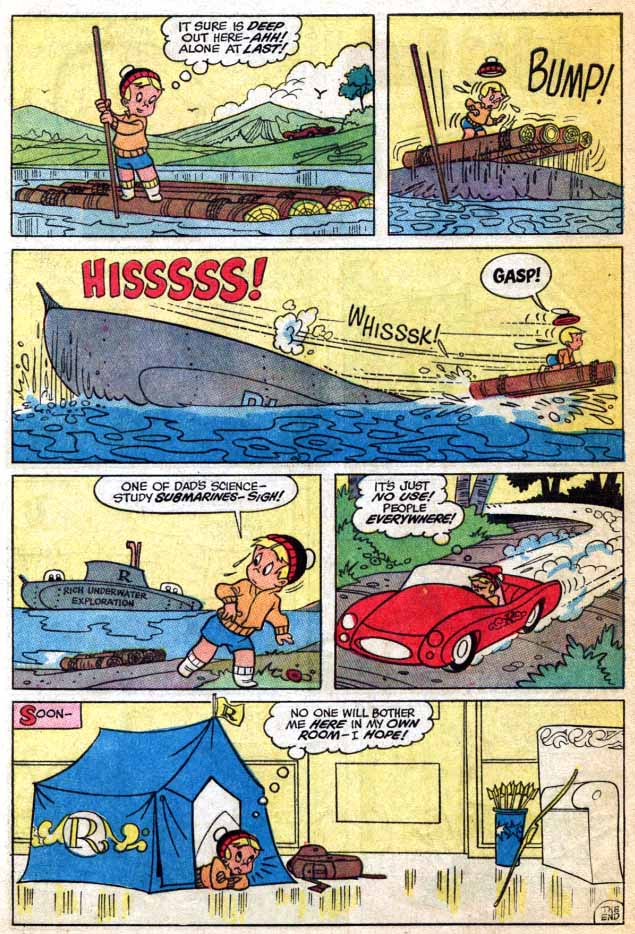 I certainly do not! GOODBYE, sir! Sheesh, no need to be so rude. Seems like the birdcounter man could be a fun friend to explore trees with.

And just when you want to relax in your mansion, here comes Hollywood! 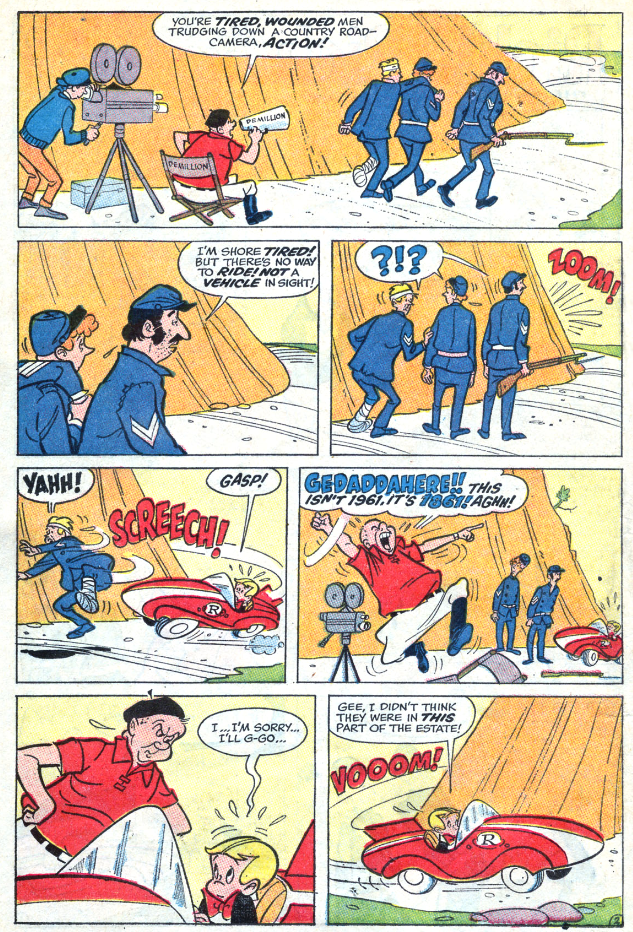 Yiish! Richie cannot stay out of the fray! Did you remember these stories?