Today’s story has some extra excitement, a great story and commentary plus a new sequel with original Richie story and art, all from Ze Mastor!

Plus, check out an interesting Richie parody on Ze Mastor’s site: http://zemastor.blogspot.com/2017/06/richie-rich-joins-70s-radical-group.html?m=1 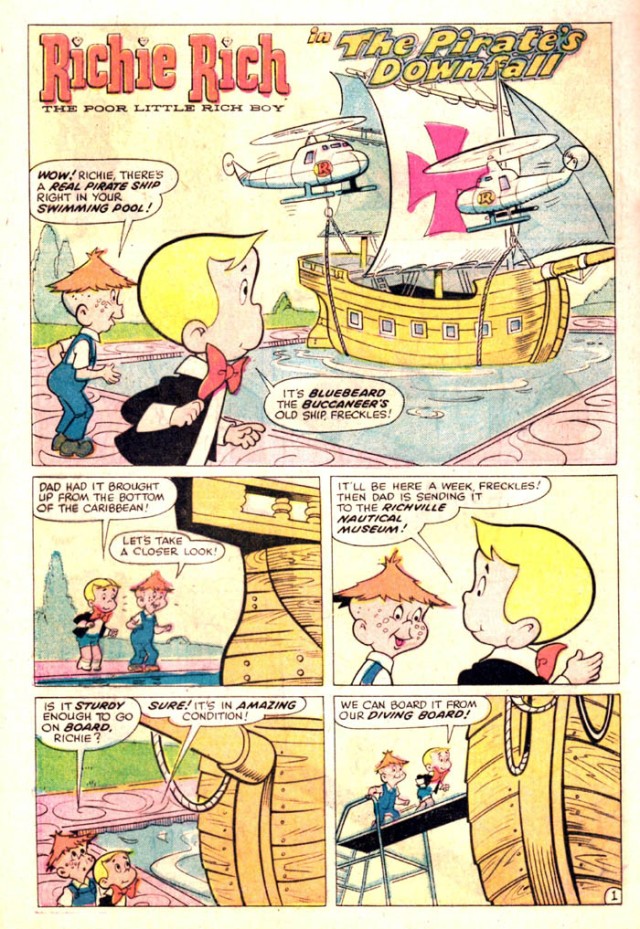 Richie shows Freckles his toy-Bluebeard the Buccaneer’s actual ship, which his Dad (said he) had dredged from the bottom of the sea. However, the ship looks suspiciously new, bright, shiny and remarkably intact, including sails, for something that’s been rotting underwater for 300 years. I think that Mr. Rich had the ship drastically restored with a 99.9% parts substitution and he’s just telling Richie that it’s the original “Bluebeard’s ship” to amuse his boy.

How cute! Thirty-something “Captain” Bluebeard IV has a group of buddies who like to cosplay with him as pirates! He claims that Bluebeard was his Great-Grandpa, which is not very likely, since the Age of Piracy ended in the early 1700’s. Mathematically, it’s just not working. He has an eyepatch, which in 1974, was not necessary because they’d already invented artificial eyes. If he really didn’t need the patch and he’s wearing it for looks, well, then he just 86’ed his depth perception, or he’s thinking of auditioning for the rock group, Dr. Hook. 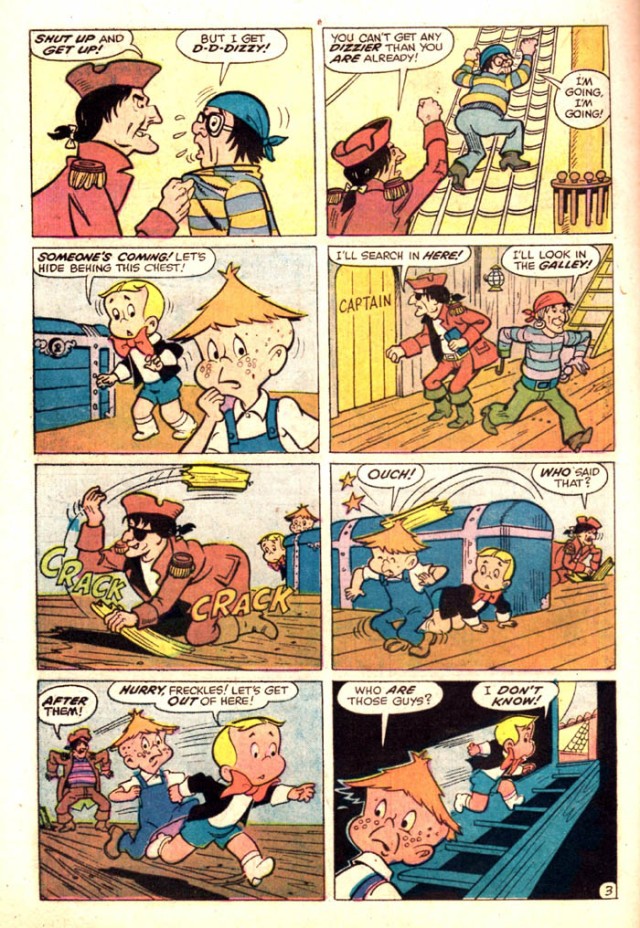 The Captain demands that his least-qualified crew member, Round John, climb up the ratlines and into the crow’s nest to keep a lookout. But, they’re in a swimming pool on the Rich estate and not on the open seas, silly gooses! The Captain tears up the floor of the Captain’s quarters with his bare hands, ruining all the beautiful restoration work, while his pirate buddy offers to search the kitchen for the treasure. Yet, his Great-Grandpa’s old diary said the treasure was hidden in the keel. They should really be down in the cargo hold, way below the decks, chiseling out the the floor planks there. Or better yet, chiseling at the keel from the outside of the ship.

The pirate buddy is, horrifically, MISSING A HAND and wearing a hook instead of a modern prosthetic device.  The pirate crew attempts to capture Richie and Freckles and make them “walk the plank” which is actually just a trope and something they saw at the movies. 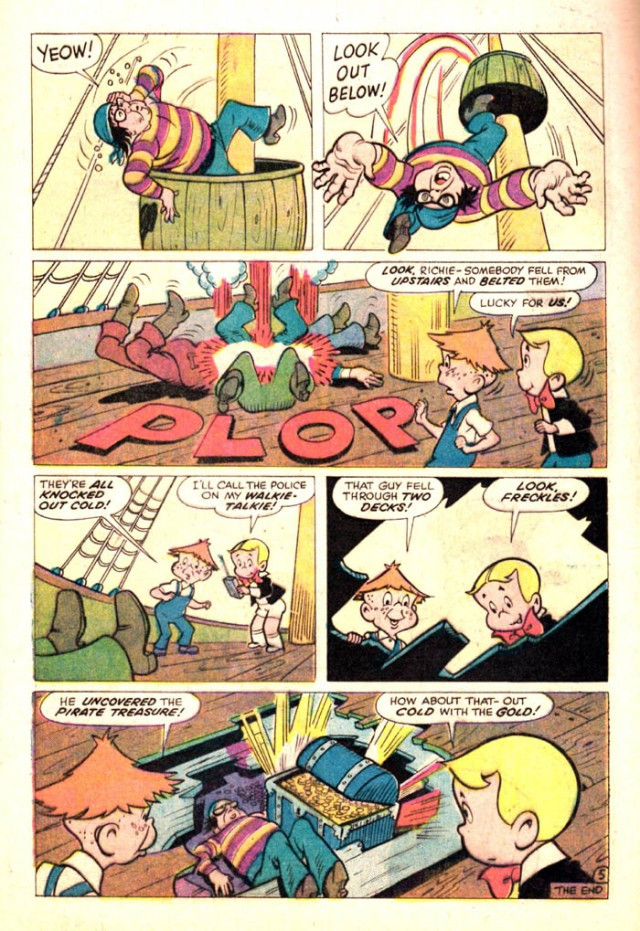 Round John gets dizzy up in the crow’s nest and falls out, landing on top of his cosplaying pirate pals, breaking his neck and every bone in his body. Freckles says, “They’re all knocked out cold.” Ummm, no Freckles, it’s WAY more serious than that.  The impact is so hard that Round John’s poor broken body smashes through two decks, revealing the treasure, which, by the way, turns out not to be hidden in the keel (keels are not hollow and are very difficult to get to from inside a ship), but simply placed in the cargo hold. How did it get there, you might ask? Well, the Rich shipyard workers obviously found the treasure while they were rebuilding the ship and replacing just about every part in it. So, they decided to have a little fun, knowing that Richie would have the ship for a week and placed it in the hold for him to find.

Since Freckles generally refuses gifts of money, and Richie is a very altruistic and compassionate young man who really, really doesn’t need extra gold or riches, I’m certain that he’ll earmark some of the treasure for poor Round John’s family for a proper burial and to help assuage their grief.

About a week later, the ship is sent to the Richville Nautical Museum, where it is correctly labelled as “a reproduction of Bluebeard the Buccaneer’s pirate ship” so tourists can enjoy the look and feel of a period ship, very much the same way that tourists currently enjoy the Siren’s Revenge, a full-sized pirate ship at Treasure Cove in Shanghai Disneyland.

Thank you Ze Mastor for the awesome story and commentary and for taking it a step further and giving us a sequel! That was so fun to read! I wonder if the Richville Nautical Museum is on this island Richie & Freckles own?

And here are two cute one-pagers that aren’t Pirate themed, but one involves water and one involves compassionate Richie so I’ll tie them in with that!